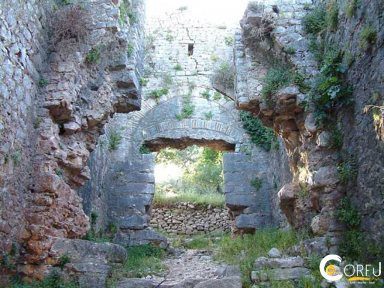 The Castle of Kassiopi is a castle on the north coast of Corfu , which is just above the fishing village of Kassiopi . It was one of the three castles of the Byzantine period ensured the defense of the island before the Venetian period ( 1386-1797 ) . These castles were a defensive triangle with Gardiki defending the south of the island , Kassiopi northeast and Angelokastro northwest.
The position on the northeastern coast of Corfu , overseeing the Strait of Corfu which separates the island from the mainland allowed the castle vantage and high strategic importance .
Kassiopi Castle is regarded as one of the most important architectural remains in the Ionian Islands , with Angelokastro , Castle Gardikiou both Venetian fortress of Corfu town , the Old Castle and New Castle .

The main gate of the castle is protected by strong ramparts . This architecture is appropriate for this quirk of castles and other structures situated on the continent , such as the Castle of the Root and the Monastery of the Lower Basilica .
The perimeter of the castle has a length of 1,073 km and is rectangular in shape with 19 strong towers alternating circular and rectangular cross sections that protect the walls and have time from the southwest to the northeast . The interior of the castle is a total area of ​​35,177 m2 and is void of any establishment if the building is overgrown with trees . The central tower of the castle has disappeared, but the main gate remains in place and is enhanced with two powerful towers on each side.

The main gate of the castle , as seen from the east. Amplified elongated walls on each side of the gate were designed to limit access and reduce the chances of a surprise ambush of enemy that was hidden on the side of the gate.
Each of the towers of the gate, had two floors , while the gateway has elongated walls which restrict access from the side , a feature which was designed to avoid surprise ambush of enemy that was hidden on the side of the gate. The chances of avoiding ambush further increased because of the steep uphill path that reaches the gate . The thickness of the walls at the height of the gate is 1,9 m. There are remains of the rampart in front gate that could be used as a large metal structure that would be used to further security gate.
There is evidence suggesting that both towers to the gateway included mechanisms that help to better control of the metal gate . The defense of the castle was achieved mainly through the defense using the loophole , although no loophole has not been preserved until today. The shape of the warrior is not confirmed if and artistic representations resemble the letter "M", however , it remains unknown whether this corresponds to reality or is merely inspiration of the artist.
Once the castle walls are vertical and not curved as cannon projectiles bouncing on them , their design was such that they do not make it possible to use any siege engine which predates the rule. In these machines included ladders , battering the towers , and battering rams . The overall design of the castle is very humble and identification of the provincial location . The rectangular towers are older than cylindrical , and there is evidence demonstrating that the technology used in the manufacture of cylindrical towers can be introduced late in the fort , given the remote and rural location .
After the castle was deserted for a long time, the building of infrastructure is in a dilapidated condition. The eastern part of the castle has disappeared and only some traces of this remain. There are also indications that the castle stones were used as building material for houses in the surrounding area . Access to the castle is particularly strong from the southeast through a narrow path which passes through houses and backyards , mainly due to the fact that the castle is located in the center of dense small village of Kassiopi . 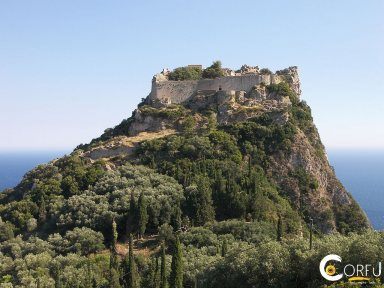 Aggelokastro is one of the most important Byzantine castles of Greece . Located on the island of Corfu at the top of the highest peak of coast on the northwest coast near Paleokastritsa and on the edge of the to... 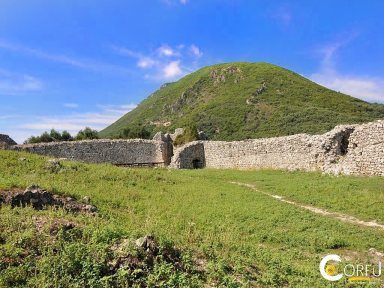 Gardiki Castle is a 13th-century Byzantine castle on the southwestern coast of Corfu and the only surviving medieval fortress on the southern part of the island. It was built by a ruler of the Despotate of Epir... 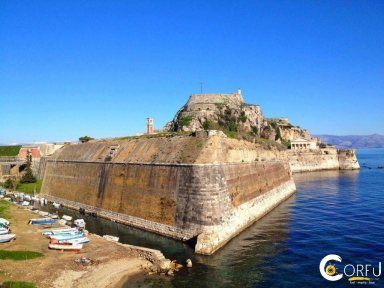 The citadel features two peaks which were fortified by strong towers for centuries. The western and higher peak, which is closer to the town, was fortified by the Byzantines around the 12th century AD and was called Cast 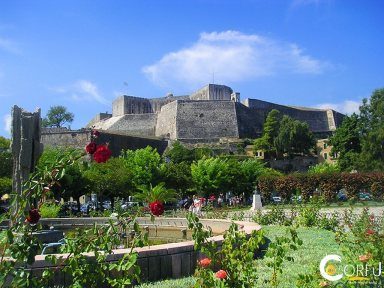 The fort of San Marcos known as New Castle is located near the old port of Corfu .

What travellers say about Castle Kassiopi 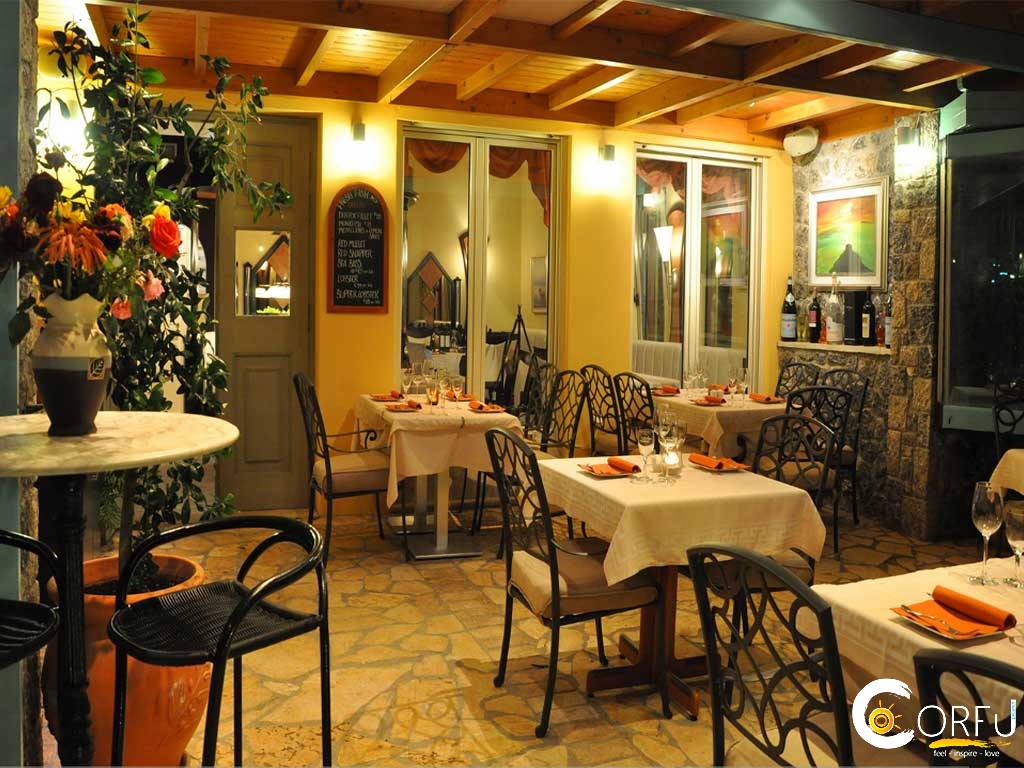 Our master chef with 25 years of experience invites you to savour the dream Greek and Mediterranean dishes she creates out of the finest and freshest local ingredients in one of Corfu s and Kassiopi s most beautiful ...
approx 120 meters (131.23 yards) away from you 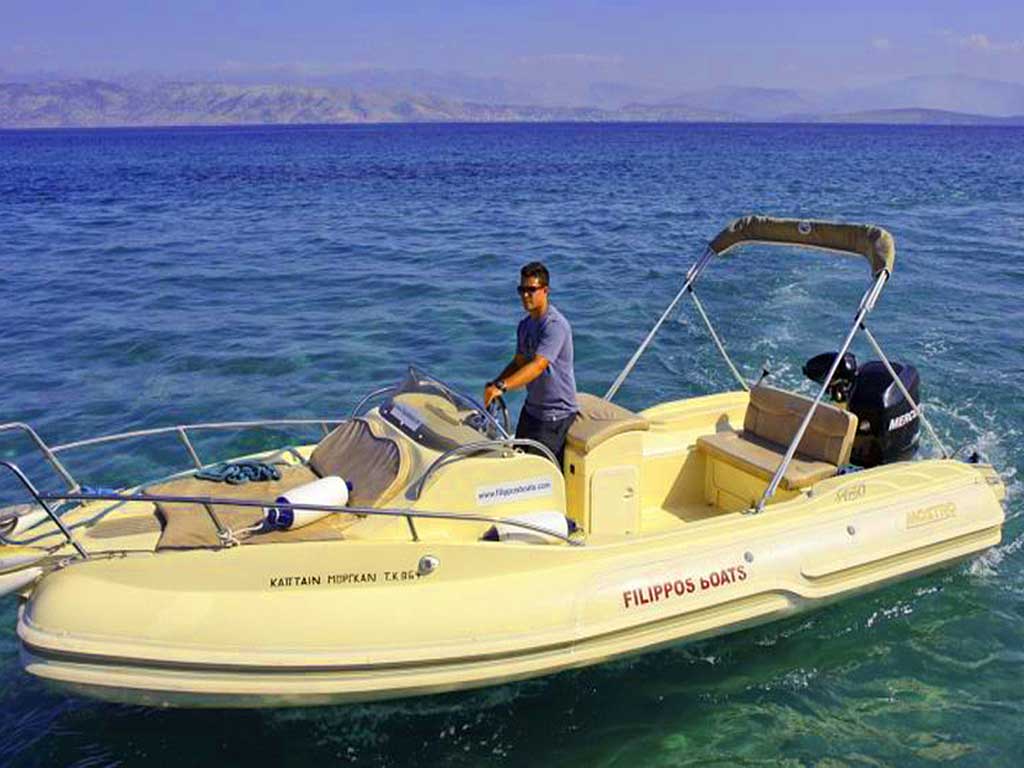 What better way to escape the crowds and explore the hidden beaches of Corfu s north east coast than by renting your own boat Filippos Boats is the longest established boat rental company in the whole of Corfu and ha...
approx 280 meters (306.21 yards) away from you